If like me you were completely unaware of Big Brother's re-emergence you may find the attached  a little more interesting. 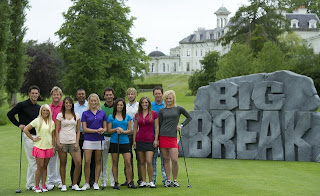 Too often recently I've heard statements that allude to the fact that we need to capitalise on Ireland's problems with our own tourism marketing in Scotland.

As a business we're linked pretty heavily to the Irish economy and see a little bit more closely how they work and with our experience as a golf tour operator to Ireland in a previous life we know for certain that in spite of the issues with hotel and golf course over capacity they have the ability to bounce back and punch way above their weight.

The Irish tourism marketing machine can be mightily impressive and their recent Home of Champions golf marketing is in our opinion just the start of the fightback and if I was American and I was being hit by Drive it Home from VisitScotland or Big Break Ireland, I think I know where I'd put my money. Have a look at the press release below - and in particular watch the video footage -  and tell me that as a golfer you wouldn't watch this? How much advertising money will be going in alongside for product positioning?

I think it's Pure Genius!

The new site features text and video bios about the 12 contestants, photos and preview videos, including a three-minute trailer that gives viewers a sneak peek into the drama and excitement that will unfold during the 10-week series. Weekly blogs from the producers and contestants also will post on the site, and fans will have the opportunity to opt in to become a “text club” member and receive weekly mobile alerts.

Big Break Ireland, premiering Sept. 20 at 9 p.m. ET, will feature an international cast of six men and six women competing against each other in an attempt to make their lifelong dreams of playing alongside the world’s top golfers a reality. Filmed at The K Club in Kildare, Ireland, the ultimate winner will be awarded two exemptions from the four exemptions up for grabs – which represent events on the LPGA Tour, European Tour and Ladies European Tour, among other prizes.

The Big Break show concept pits highly skilled golfers against each other in a variety of challenges that test their physical skills and mental toughness. During Big Break Ireland, one contestant will be eliminated each week, with the last person standing crowned Big Break champion.
Posted by Admin at 12:06