Following the publication of yesterdays blog article on the Scottish Food Project The Ayrshire Food Network contacted us applauding the recognition and Governmental focus being given to the potential benefit of more locally produced Scottish natural food being made available for use in the hospitality /tourism industries..

There is growing on the ground evidence that customers are increasingly looking for locally sourced food and an authentic food experience at value for money prices .

Ayrshire is involved through proactive participation in industry led national initiatives aimed at getting local food featured and used at events:taking advantage of both our land based food and locally sourced sea foods.An increasing number of supply alliances are developing , and local food knowledge, availability and provision strengthened .

We would encourage everyone to take an increased interest in where their food is sourced ,both in personal shopping terms viz : at farmers' markets and when eating out .Ask those serving you about the food ? and be willing and comfortable to talk up our local specialities and encourage others to try them .

Scottish Food To Be Celebrated

A year-long celebration of the best in Scottish food has been launched by Tourism Minister Jim Mather.
The Government will provide £500,000 to fund events aimed at promoting Scotland as a land of food and drink.

Events will also encourage more use of local, fresh and seasonal produce within the tourism industry.
Mr Mather said: “The tourism sector is playing a vital role in Scotland’s recovery and was instrumental in our recent return to growth, attracting more than 15 million visitors and having a significant economic impact during the year of Homecoming.

“It makes strong economic sense to build on this success by spotlighting some of Scotland’s greatest assets as we build towards a second year of Homecoming in 2014.”

Scottish produce will be showcased at the Royal Highland Show in Edinburgh in June, the Dundee Flower and Food Festival in September and the BBC Good Food Show Scotland in October, among other events.
Paul McLaughlin, chief executive of Scotland Food and Drink, said: “The year of food and drink is an excellent platform to help us promote Scotland’s outstanding produce both in the UK and across the world.
“Scotland Food and Drink will be working hard to maximise awareness of the country’s premium products throughout the year.”

Dr Mike Cantlay, chairman of VisitScotland, said: “Scotland has a fantastic natural larder and the year of food and drink is an excellent opportunity to showcase this country’s growing reputation as a world-class culinary destination.”

Email ThisBlogThis!Share to TwitterShare to FacebookShare to Pinterest
Labels: scotlands for me, Scottish Food Tourism

CalMac Taxis on Street of Glasgow

Really liked this wee campaign from Caledonian Macbrayne who have just launched a fleet of CalMac branded taxis with the familiar livery and lion rampant brand on the streets of Glasgow!

Inside, seats are fitted with adverts featuring inspirational views of the islands we sail to, with rear window stickers adding a quirky finish.

CalMac warned however, "If you find yourself in and around Glasgow city centre this weekend and happen to hail a CalMac cab, beware, you might just be tempted to change your destination and head for the west coast!"

Great marketing campaign guys!
Posted by Admin at 14:27 No comments:

Golf Tourism Scotland (GTS) has announced that it will host an all-day forum on Tuesday 6 July to discuss the future of golf tourism in Scotland. The high-profile event will form a key part of the celebrations marking the trade body's fifth year of campaigning for the golf tourism trade sector.

Hosted at Murrayshall House Hotel in Perthshire, the all-day national forum will bring together an impressive line-up of key-note speakers from both public and private sectors to discuss what the next five years hold for golf tourism in Scotland. As a result, trend spotting will be the order of day along with a healthy dose of best-practice guidelines, with some educated and inspired projections for the future.

Also giving their insights into what lies ahead will be Seamus Coen, a regional general manager at Macdonald Hotels and Max Hare, a German tour operator serving a host of European countries including Scotland.

"It's an extremely exciting line-up, made all the more intriguing by the theme of forum," noted GTS chairman Nick Hunter. "We've given them a fairly strict brief to identify key trends that will influence their sector and reveal how they intend to develop their organisations within these parameters. It will be a fascinating day, finding out what the future holds for each of us."

With more speakers still to be announced, the GTS 'Gimme Five' forum will be an intriguing and pertinent event for the entire golf tourism industry.
Posted by Admin at 10:58 No comments:

The Edge are absolutely delighted that we have been selected by North Highland Tourism to develop an on-line presence for the recently formed Dornoch Firth golf development group.

Following a recent presentation at Royal Dornoch Golf Club, The Edge have been asked to produce a new brand for the group and then take it to a new website supported by an aggressive social media campaign. The project which brings together five courses in the Dornoch Firth area - Royal Dornoch's Championship Links and The Struie, Tain, Brora and Golspie. 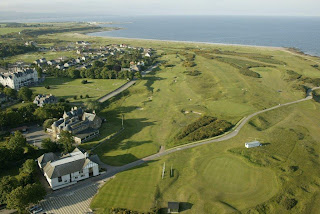 Director Ian McCaig was delighted at the news, "We work with an extensive range of tourism businesses in The Highlands and the securing of this project is really exciting. We know the area well having worked with the courses previously in the Highland Golf Classics and recently we just launched the new websites and on-line marketing strategies for the refurbished Royal Golf Hotel in Dornoch and The Royal Marine Hotel in Brora. Late last year we were also delighted to go live with a website for Dragons Tooth Golf Club near Fort William."

The Edge are also working on a new blog for Castle Stuart Golf Club which support their current website and have been heavily involved recently in the project management of the Cup Final single for Ross County recorded by Highland band Torridon.

"We recognised late last year that we were working with more and more tourism businesses in the area and decided that we needed a permanent presence in The Highlands. We were delighted therefore to bring on Nairn based Sue McCulloch to work with us on key projects and this is proving highly successful and increases dramatically our direct communications with our clients. An office in Inverness is now a very serious possibility for The Edge"

The work on the Dornoch Firth Golf Pass follows on from work done in recent years with First in Fife Golf, Links with History, the Ayrshire Golf pass and Scotland's West Coast Golf Links

"We're proud of the work we've done for golf tourism in Scotland and we hope that we'll continue to build the relationships with this most important of industry sectors throughout the rest of this year." finished Ian McCaig.
Posted by Ian McCaig at 15:55 No comments: 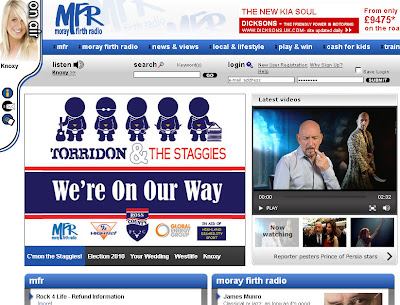 Great support for one of their local teams from MFR in The Highlands. The radio station has got fully behind the promotion of the Cup Final Single, "We're On Our Way" which was recorded only two weeks ago at The Ironworks in Inverness.

Not only are they providing great airplay for the track but they've add the Edge designed logo and banner onto the from page of their website with a link through to how supporters can help getting the song into the charts.

The Edge have provided marketing support not only for the logo design but also in pulling together elements of the original recordning and working with The Music Kitchen in edinburgh to ensure the track was available the week of the final, Ian McCaig was delighted with the results so far. "Dingwall has only a population of I think about 5000 and for the track to chart even in the Scottish Top Forty would be great fun!"

The support from MFR is helping the track go viral and it's looking that even with it only being available on iTunes that it could well chart high in The Scottish Top Forty this weekend.

We're On Our Way Downloads Page

It's just over a week until Ross County hit the A9 and all B roads' off it south to Hampden Park for the biggest game in the club's history - their Scottish Cup Final showdown against Dundee United.

The whole of the North Highlands is buzzing and we're guessing that not much else will happen this week beyond Inverness. The Staggies really are on the Way.

And talking of which the iTunes single which we've been helping promote is dues for release on Monday morning.

To keep the momentum going we've created some online promotional material for Torridon to ensure that Ross County fans - and anyone else who wants to - can easily promote and find their way to downloading the single and hopefully get it into the charts next Sunday. Wouldn't it be perfect just as the open topped bus pulls into Dingwall with the Cup...

iTunes
The single is only available to buy on iTunes from Monday 10th of May. All proceeds will be going to Highland Disability Sport.If you don't have an iTunes account you'll need to set one up - pretty painless - click to find out How to Set up an iTunes account 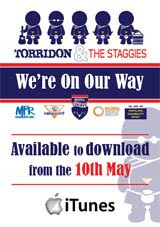 Anyway both of the banners below link directly to the page selling Torridon & The Staggies "We're On Our Way".

That can also be downloaded from here.

We're just pulling together all of the elements of the integrated online marketing campaign for The Royal Golf Hotel and its sister hotels Loch Ness Country House Hotel in Inverness and Royal Marine Hotel in Brora and whilst creating their email tempalates and sign up lists we added the Sign Up tab to their Facebook page. 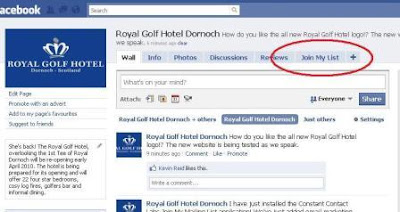 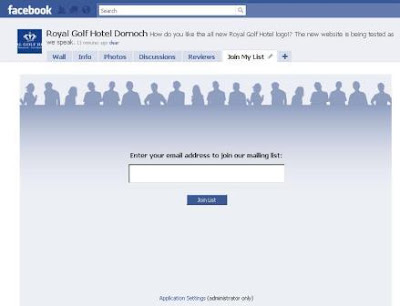 You can try ConstantContact for free for up to 60 days and of course The Edge will work with you in developing it into your overall online marketing campaign.

Find out more about ConstantContact with The Edge
Posted by Ian McCaig at 13:05 No comments: