Another day another piece of bluster from Ryanair's CEO.
However in saying that if you can cut through the hyperbole the reason for worry for Scotland's inbound tourism market is very real.
The release states that Ryanair is cutting capacity from Stansted by 40% this winter and the number of aircraft based at the BAA airport will be reduced from October to 24 from 40 being flown this summer. Apples and oranges comparisons perhaps as it is comparing summer schedules with winter although as we understand it there is a small decrease of two aircraft from the same time last year.
He was quoted thus,"Sadly UK traffic and tourism continues to collapse while Ryanair continues to grow traffic rapidly in those countries which welcome tourists instead of taxing them. Ryanair’s 40% capacity cutback (sic) at London Stansted shows just how much Gordon Brown’s £10 tourist tax and the BAA Monopoly’s high airport charges are damaging London and UK tourism and the British economy generally.
“In recent months the Belgian, Dutch, Greek and Spanish governments have all scrapped tourist taxes and/or reduced airport charges to zero in order to stimulate tourism. These cutbacks underline the urgent need to; (a) break-up the high cost BAA Airport Monopoly (as recommended by the Competition Commission) and (b)scrap Gordon Brown’s insane and damaging £10 tourist tax which has caused UK traffic to collapse.”
The final two points do indeed have some merit and their impacts on Scotland could be felt badly in the future.
The BAA break up is one that continues to worry us most. Not worrying about whether it will be good or bad for Glasgow and Edinburgh as we're pretty sure they will continue to survive with perhaps some rationalisation and market shift.
The big question will be what is going to be the knock on effect to Prestwick Airport? 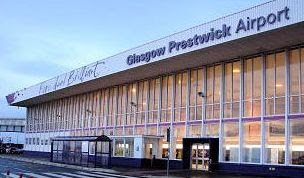 The airport is reliant more than ever on the traffic generated by Ryanair; the slow seepage of routes to Edinburgh is extremely worrying and can only get worse should Glasgow and Edinburgh be under competitive management; will Ryanair stay loyal to Prestwick should the non BAA airport start courting them as a hub?
We think that highly unlikely.
The Prestwick situation post BAA break up seems to us to be the elephant in the room in Ayrshire with little apparent public concern being raised over the (worryingly logical) consequences of the BAA break up.
Not intended to be scaremongering but in any SWOT analysis (are they still done?) it would certainly make it into the Economic Threats category along with Johnnie Walker's planned closure in Kilmarnock.
Is anyone else worried?

As you indicate that "perfect storm" could just be brewing taking acount of the inter-dynamics between suppliers customers,competitors ,alternative providers,and pressure groups