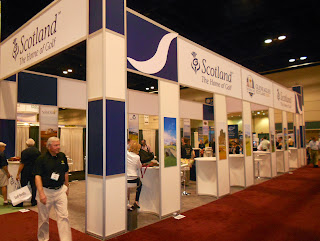 With an impressive stand design featuring the Scotland The Home of Golf branding, Scotland’s representatives at The PGA Merchandise Show in Orlando, Florida enjoyed a successful three days promoting the country’s golf offering and attracting more golfing visitors from the USA.

Speaking at the event, GTS chairman Lee Derrick said, “The PGA Show is one of the main golf industry events of the year and an important showcase for Scottish golf tourism businesses. This year we took more stand space than ever before and created a presence that truly reflected the quality of Scotland’s golf offering. The feedback from our stand partners has been positive and this week could generate thousands of pounds’ worth of business for the sector.’’

GTS was joined by 10 partner organisations representing a broad spectrum of Scotland’s golf industry, including golf resorts, tour operators, hotels and industry groups. The consortium was the largest ever assembled to represent Scotland at the annual PGA Show.

“The commitment shown by everyone who attended has been very impressive and gives us a real platform to build on,” noted Derrick. “As a starting point for an exciting and busy year for Scottish golf, we could not have asked for anything more.”

As well as manning the prominent exhibition stand, delegates also attended a Scottish golf day prior to the show which attracted around 70 leading industry figures and golf journalists. The Scottish contingent included Andy Burgess, head of operations and development at Meldrum House, who picked up the 2011 GTS Gold Standard award for Hotel of the Year (country house hotel category).

“The PGA show is where a lot of decisions are made concerning the golf travel industry, so being there is an absolute must,” Burgess said. “Partnering with so many other businesses meant we could boost Scotland’s presence and get our message across to more buyers. It was simply great to be there.”
Posted by Admin at 10:17