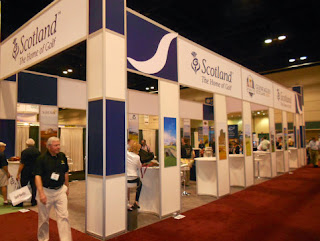 Over the past seven, maybe eight years no we've been working with trade body Golf Tourism Scotland in a number of areas from strategic planning through to online marketing marketing workshops. (We're currently redesigning their website for an Easter laucnh to make it more consumer facing.)

The body were attending the PGA merchandise show in Orlando and we were delighted to step in to help finish of their stand display for the show.

Not a big part of the stand we have to say but we quickly turned around the graphics required for each of the participating members to ensure that the stand's branding was continuous.

The overall stand was we think put toegther by VisitScotland in conjucntion with the GTS team and it certainly gives a very positive impression.

Speaking at the event, GTS chairman Lee Derrick said, “The PGA Show is one of the main golf industry events of the year and an important showcase for Scottish golf tourism businesses. This year we took more stand space than ever before and created a presence that truly reflected the quality ofScotland’s golf offering. The feedback from our stand partners has been positive and this week could generate thousands of pounds’ worth of business for the sector."

GTS was joined by 10 partner organisations representing a broad spectrum of Scotland’s golf industry, including golf resorts, tour operators, hotels and industry groups. The consortium was the largest ever assembled to representScotlandat the annual PGA Show.

“The commitment shown by everyone who attended has been very impressive and gives us a real platform to build on,” noted Derrick. “As a starting point for an exciting and busy year for Scottish golf, we could not have asked for anything more.”

As well as manning the prominent exhibition stand, delegates also attended a Scottish golf day prior to the show which attracted around 70 leading industry figures and golf journalists. The Scottish contingent included Andy Burgess, head of operations and development at Meldrum House, who picked up the 2011 GTS Gold Standard award for Country House Hotel of the Year.

“The PGA show is where a lot of decisions are made concerning the golf travel industry, so being there is an absolute must,” Burgess said. “Partnering with so many other businesses meant we could boostScotland’s presence and get our message across to more buyers. It was simply great to be there.”

You can find out more about Golf Tourism Scotland on their current website - new one due out April 2012!
Posted by Ian McCaig at 09:03