According to North Highland Tourism golfing visitors making use of the Dornoch Firth Golf Pass have boosted the local economy by an estimated £40,000 since the scheme was launched eight months ago, according to an online survey.

Plan B and The Edge produced the new design for the group which was then developed into new print, new website and online marketing support materials.

The pass enables golfers to receive 30 per cent discount off five rounds of golf once they have purchased the pass for £30.

The obvious attraction of the pass is the opportunity to play Royal Dornoch's Championship Course but it also promotes the area for golfers to stay in and to enjoy a range of courses at Brora, Golspie and Tain as well as Royal Dornoch's Struie Course.The pass was launched between the four clubs with assistance from the Highland Council ward discretionary fund, the VisitScotland Growth Fund and five local hotels.

Jill McNicol, marketing and membership manager of North Highland Tourism, said: "The pass has been the result of the clubs' collaboration and the recognition that by working together the Dornoch Firth area can be put on the map as a destination for the golf visitor.

"Results from our online survey reveal that visitors to the area expect to spend three or more nights in the area, spending an average of £250 per trip, and we estimate that the visitors who purchased the Dornoch Firth Golf Pass have put £40,000 into the local tourism economy." 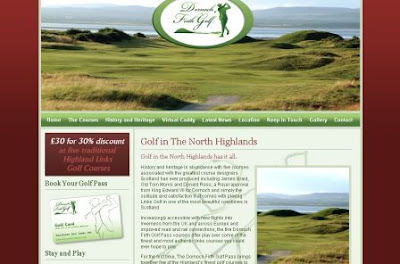 The partnership behind the scheme has sold 160 passes, generating revenue of £4800 for the Brora, Golspie, Tain and Royal Dornoch golf clubs, with further green-fee sales of £30,000 when used.

The Dornoch Firth Golf Pass gives golfers an opportunity to play Royal Dornoch as well as other courses in the area.

The partnership's new website, www.dornochfirthgolf.co.uk, is starting to see its first online pass sales come through.

Over 55 per cent planned to stay away again using their existing pass.
Posted by Admin at 17:08