Move to the Seaside For Golf's Scottish Open?

According to The Scotsman, "The Scottish Open, which has been held at Loch Lomond since 1996, could be heading to a new venue after the European Tour confirmed it is in discussions with "four or five" links courses at the request of sponsors Barclays."
"The news is a blow to Loch Lomond Golf Club. It posted pre-tax losses of £45.5 million for 2008 and has been on the market for the past two years."
Apparently, the tournament sponsors, Barclays would to see the event played ton a links course in the hope of attracting all the world's top players the week before The Open and a decision on a prospective new venue could be made in the next month.

You have to feel a little for Loch Lomond which is a splendid spectacle but it does make sense certainly for the organisers to have the event as a warm up for the links based Open Championship which follows on the week after. From a Scottish perspective it could be good for other tourism areas who find early July a perennial struggle to fill rooms.

East Lothian has apparently been mentioned but the problem of the number of available rooms would push visitors into Edinburgh, Ayrshire's obvious candidate could have been Dundonald Links as the sister course of Loch Lomond. It does look however from the outside look as though the change of ownership plans may have inadvertently contributed to the course losing the event and that in turn would mean that Dundonald could be ruled out also. 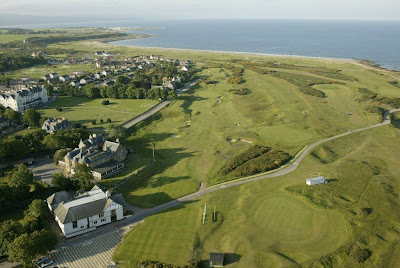 My choice? Let's be brave and go to somewhere fresh to areas that would directly see the benefits. If you want tradition go to Royal Dornoch, if it wasn't where it was it would have hosted half a dozen Opens already; if you want something new and challenging make it Castle Stuart between Nairn and Inverness.

Go on European Tour show some innovation...
Posted by Admin at 09:44