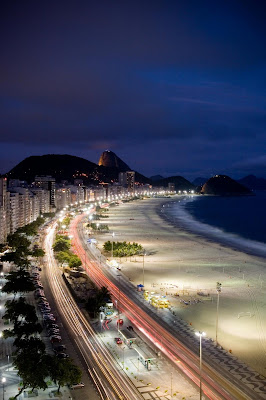 I noted in the Daily Record or Sunday Mail that "tourist bosses are planning a second massive Homecoming celebration honouring Robert the Bruce to mark the 700th anniversary of the Battle of Bannockburn, generating millions of pounds and according to the paper the follow-up is to be staged on June 24, 2014, at Bannockburn, where Robert the Bruce fought off Edward II's army."

The paper also noted that the clan gathering in 2014 would be held the same year as the Commonwealth Games in Glasgow and the Ryder Cup at Gleneagles.

What it forgot to look up is that it's also slap bang in the middle of Scotland's finest ever World Cup campaign in Brazil 2014 which may also vie for the venue of the biggest Tartan Army Gathering seen since Paris!

As proud as being at Bannockburn would make me I have to say that come June 24th 2014 I could only say that there could be no finer place to celebrate the day than the Copacabana with the kilt, The Tartan Army and some Factor 50 waiting to play our first ever World Cup Quarter Final tie - against the English.