What makes you leave a service provider? Well it normally takes a lot because the hassle and time involved in shifting bank accounts, or Broadband, or telephone makes it so scary that you end up putting up with the poor service as better than the thought of losing your connection, or direct debits or incoming payments.

The opposite is however also true and we use social media and customer review sites more too often to criticise bad practice rather than promote good service. I know I do.

So when you get something as exceptional as the service I've just received then you really should share it. 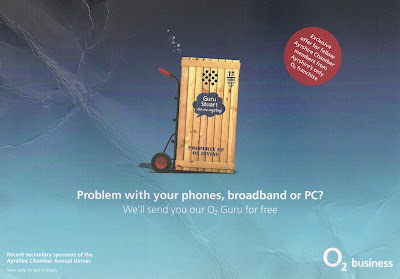 Now for two weeks I've been trying to figure out how I could synchronise my Google Apps for Business. driving me absolutely nuts and I spent seriously eight hours, maybe more, trying to fix it.

So with nothing to lose a quick email to O2 Guru Stuart; the first reply suggested that he couldn't help as it would require changes to certain things that he couldn't fix. Five minutes later however a phone call saying that he had reread it and would come back to me if there was anything he could find.

Another five minutes passed and an email arrived with a techy type link but with easy to follow advice on what I'd done wrong. Ten minutes later, mild punching of the air and a fully synchronised communications network now working between Google Mail, iPhone and outlook on the the laptop.

Now when BT next phone me up from a call centre somewhere asking me if I'd like to switch my mobile, landlines and telephones back to them what do you think my response will be?

Almost without exception I have found the support from O2 Business to be exceptional. Exceptional may be hyperbole or not but customer care is only tested when things are going wrong. It's how you handle the negative issues that determine all of our future relationships with a client or supplier. When things go wrong with O2 - and they have - the ethos is let's sort it together.

So here I am feeling better about myself this afternoon because I'm praising someone! Feels great! And if it gets up the line to O2's customer service team then even better because Stuart in Irvine has made my working day, week prhaps even my month infinitely smoother than it was looking at ten o'clock this morning.